Shaxian chefs serve up a taste of home 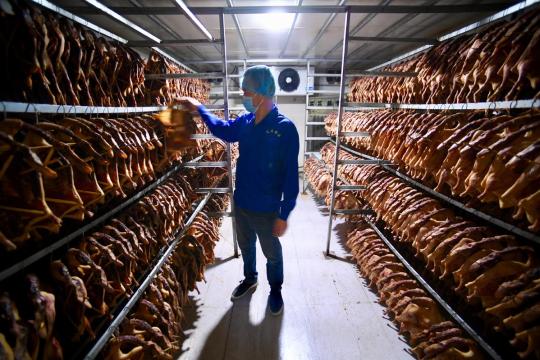 A worker checks cured ducks in a workshop at a food industry park in Shaxian county, Fujian province, on Nov 18, 2020. (Photo/Xinhua)

The popular and affordable cuisine has spread, thanks to the efforts of cooks from the county

When people want to grab some food but can't be bothered going to a fancy restaurant, they can almost always find a Shaxian eatery in a corner of their city.

By last year, about 60,000 residents had left their homes in Shaxian county, Fujian province, to seek their fortunes running restaurants. China has about 88,000 Shaxian eateries, the county government said.

The most famous Shaxian dishes are steamed dumplings, soups, dried noodles with special sauce and wontons.

Mao Feilong, a 44-year-old Shaxian local, joined the exodus of cooks 23 years ago. He said that besides its affordability and good flavor, the secret of the Shaxian food's spreading popularity lies in the ability of people from the county to work hard.

"Shaxian people will work like crazy if they spot a profitable business opportunity," Mao said.

He closed his restaurant in Huzhou, Zhejiang province, in August so he could look after his mother while she underwent hospital treatment for a debilitating illness, and is now learning more Shaxian cooking skills at a training school set up by the county government.

Mao previously ran a number of Shaxian eateries in cities across the country, including Fuzhou, Fujian's capital, Jincheng in Shanxi province, Erdos in the Inner Mongolia autonomous region and Jiaxing and Huzhou in Zhejiang.

His customers were mainly workers from nearby construction sites, including forklift drivers and businesspeople from Fujian. Last year he earned about 20,000 yuan ($3,034) a month.