Porcelain artifacts on plateau testament to integration of ethnic groups

Zhou Huayong, 45, has been running a porcelain shop in southwest China's Tibet Autonomous Region for 15 years. He surely knows the importance of porcelain in Tibetans' daily lives.

"The cups for drinking buttered tea are the most popular products, and those for drinking sweet tea are becoming more and more delicate," said Zhou, who is from Jingdezhen, an eastern Chinese city known as the "porcelain capital."

Since ancient times, batches of porcelain transported along the ancient Tea Horse Road to the Tibetan plateau have become a strong witness to the ever-increasing cultural exchanges between the Han and Tibetan ethnic groups. 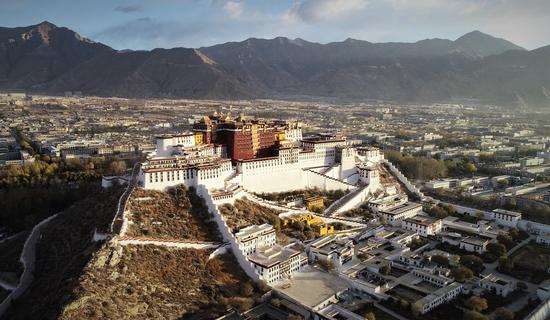 "The exchanges of porcelain products have never been interrupted since the Tang Dynasty," said Liu Wei of the Palace Museum in Beijing, in an article.

Currently, there are more than 10,000 pieces of ancient porcelain in Tibet, mainly from the central governments of past dynasties, the special orders by the upper strata in Tibet, as well as the trade between inland areas and Tibet in history.

Such treasures are now mainly preserved in the Potala Palace, Norbulingka, the Tibet Museum and major monasteries in Tibet.

A delicate multicolor bowl made during the Ming Dynasty (1368-1644), now kept in the Sakya Monastery, is the hitherto earliest and best preserved among its kind. It was gifted by the authorities of the Ming Dynasty to the monastery.