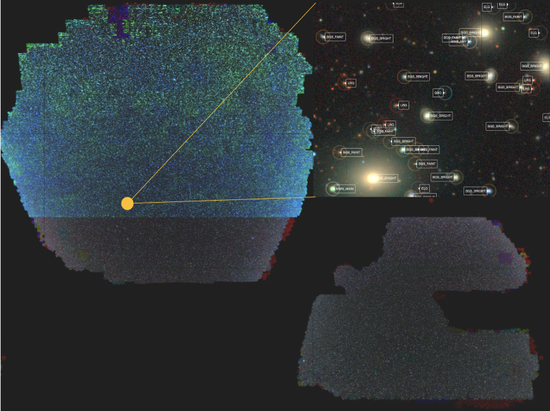 The image from the website of the Dark Energy Spectroscopic Instrument (DESI) shows the sky distribution of the latest imaging data by the DESI. The enlarged image is part of the sky showing the DESI spectroscopic targets labelled in circles. (Photo provided to Xinhua)

An international research team has released a giant 2D map of the universe, the National Astronomical Observatories of China (NAOC) under the Chinese Academy of Sciences said Thursday.

Conducted by the Beijing-Arizona Sky Survey (BASS) of the NAOC and the Dark Energy Spectroscopic Instrument (DESI), the study paves the way for the upcoming new-generation dark energy spectroscopic survey.

Nearly 200 researchers from the NAOC and the DESI jointly observed galaxies and analyzed the data over the past six years. They stitched together the observed images and formed a giant 2D map of the universe.

The map covers half of the sky, digitally sprawls over 10 trillion pixels and contains about 2 billion objects, said Zou Hu with the NAOC.

Astronomical observations reveal that the universe is expanding and appears to be accelerating. The power driving the expansion is called dark energy by astronomers, according to Zhao Gongbo, deputy director of the NAOC, also a team member of the DESI.

Dark energy accounts for about 68 percent of the universe and remains a mystery, Zhao said.

By measuring large-scale redshifts of galaxies, which are usually considered as evidence of cosmic expansion, astronomers can describe the 3D distribution of the cosmic materials and reveal how dark energy impacts cosmic expansion.

The DESI will conduct a five-year mission to obtain the redshifts of millions of galaxies and construct the largest 3D universe, said Zhao, noting that it is expected to solve the mystery of dark energy.